Dubrovnik In The rain

SINGING IN THE RAIN

Dubrovnik is surrounded by karst mountains. For centuries, the limestone, extracted in local quarries, was the only constructive material available. Therefore, the whole city is built with it. The City Walls, houses, everything is made of limestone. Even streets are paved with the limestone slabs.

The limestone is soft and porous, and quickly worn. Over time, the streets got smooth and polished, due to the many walkers that appear they are marble-paved. Polished limestone is slippery, like real polished marble.

It is very interesting to experience Dubrovnik in the rain, the limestone soaks water and becomes even more slippery. It appears more of sliding than walking over the streets whenever it rains.

The only pair of shoes that are “must-have” in the Old City are rubber boots. In Dubrovnik, in general, rain comes with a strong wind, and there is no way that an umbrella can protect you. Our wintertime is mostly rainy. Also, for summer storms, which are rare, so much rain falls in a short time, that the city often floods. Every street becomes a waterfall, and the central part, the lowest part of the city, where all that water runs, becomes a lake.

(There are video clips on YouTube about summer floods in Dubrovnik. One of them named “Kiša Stradun 25. rujna 2017” can give you an idea of how it looks like.)

For such occasions, rubber boots are the best footwear. Today in Croatia, you can buy female rubber boots in different colors, with patterns, flowers, lace, but what you still cannot find is a pair of nice, large size female boots. When you have big feet as I have, you can find just those ugly black or green ones. Like I am going to catch frogs, not parade at the most romantic place in the world! 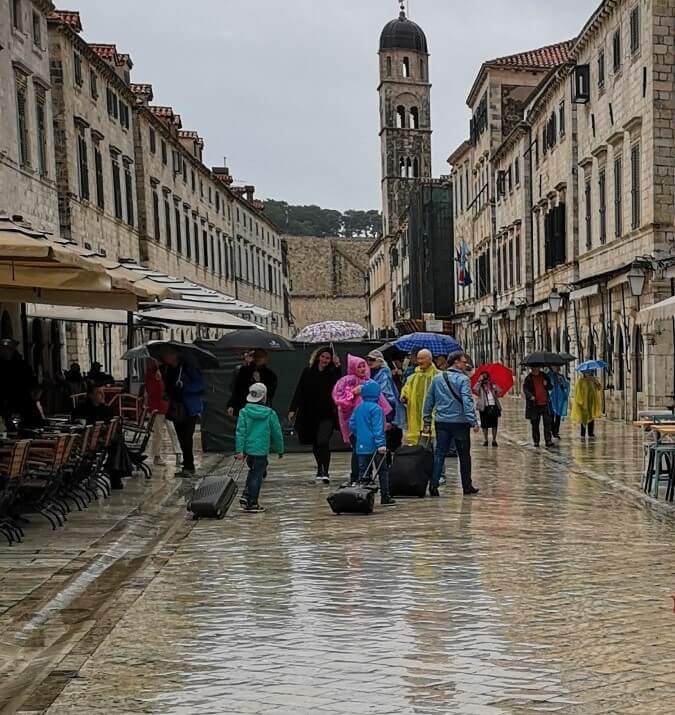 DANCING WITH THE WIND

Fighting the wind is an additional “fun” for everyone in Dubrovnik in the rain. As soon as you try to open the umbrella, you feel the wind carry you. The best case scenario is when the wind immediately breaks the umbrella. You will only be completely soaked. Otherwise, you will struggle with the wind, maneuver your umbrella, be equally wet, and at the same time, be in danger of hurting yourself or some of the passersby.

Once the rain stops and water drains, the washed stone shines even more beautiful, and every stone sparks on the sun. At that time, your rubber boots become a nuisance, (luckily, you don’t have an umbrella any more), but that’s the charm of living in Dubrovnik!

If you join me on the Dubrovnik city tour, you’ll hear more stories about the life in the Old City of Dubrovnik.